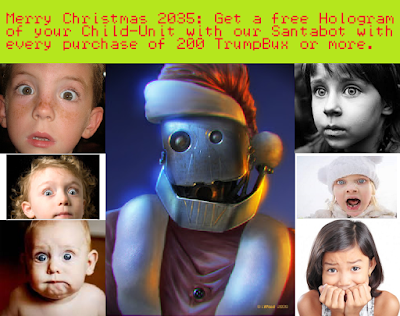 Posted by Mike Cohen at 7:30 PM No comments: 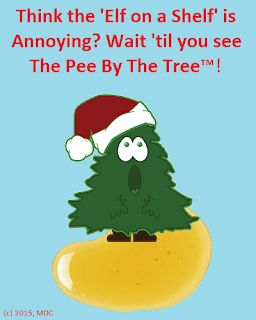 The Pee By The Tree™ is a realistic-looking, durable yellow rubber mat that will provide years of Holiday Fun. Use it to shame naughty children, or to frame pets: "Kids, this is why Mr. Piddles is going back to the Shelter." Think of the look on your children's faces as they come downstairs on that special morning, and their presents appear to be standing in...you guessed it! "Well, kids, it looks like Santa had TOO many glasses of milk last night, if you know what I mean...."

Posted by Mike Cohen at 5:28 PM No comments:

The Tie of the Eiger

Special neckwear that can only be worn by Swiss Mountain Guides in the Jungfrau Region ("It's the Tie of the Eiger, it's the thrill of the Heights"):

Posted by Mike Cohen at 3:32 PM No comments:

While I was working at Brandeis University this past Summer, I had to deliver a lot of packages to the back of the Rose Art Museum. but never got to actually go inside and see any of the Art. Today I went down to Waltham to check it out. They're having an exhibit by Lisa Yuskavage, who, it turns out, paints rather disturbing female nudes in a rather billowy & cartoony way. (I won't post any samples here, so you'll have to look them up yourself, if you must.)

Another exhibit had 60's Pop-Art by Roy Lichtenstein and James Rosenquist. Just as was I walking in, they were starting a presentation on one specific painting by Rosenquist, "Two 1959 People". A professor from the Art Department went on and on for almost an hour, just about this one work. Apparently it was intended to be a biting take on Consumer Culture, which, maybe back in 1963, it was. But now? I'll grant you that it is mildly unsettling, but hardly a masterpiece -- bearing in mind that anyone of us could produce a similar collage on our home computers in about a half hour. See for yourself: 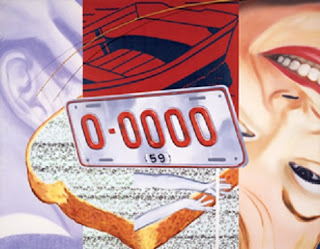 Posted by Mike Cohen at 7:48 PM No comments: