Breaking news from New England: Pumpkin breaks the "Four-Minute Mile" of competitive vegetable husbandry. Yesterday, at the Topsfield Fair, a giant pumpkin grown by Ron Wallace of Greenwich, RI, set a new World's record--and broke the fabled "One Ton Barrier"--when it weighed-in at a whopping 2,009 lbs. 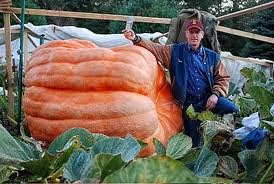 In other news, Boston Attorney Mitchell Garabedian has been retained by an anonymous "prize-winning vegetable". Garabedian is reportedly suing a Rhode Island "Grower" for an unspecified amount, for inflicting "a ton of physical and emotional abuse" on his client.