My cross-country ski boots, that is. The last time I went x-country skiing, back in February or March of 2012, my right boot came apart. The sole came loose from the upper, halfway along its length, from the binding pin down to the arch. I had to limp back through the snow, skis on my shoulder, the broken boot flapping open like Jaws and collecting a lump of snow with every step.

Naturally, I didn't get around to replacing it until the day before the big Blizzard. I went to Play It Again Sports in Stoneham, because they usually have a good stock of new and used equipment, but just couldn't find boots that were the right size. So I went home, and got out the super glue and some serious clamps. I applied glue generously along the inside of the sole, and then clamped the shoe tight. 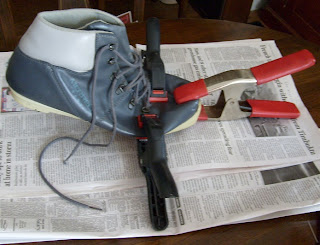 On Saturday morning, I took off the clamps, and then ran a bead of super glue along the top edge of the sole, just for insurance. I also made sure to get as much glue as I could down into the small remaining gap between the toe and the front of the sole. By late afternoon, the weather was better, and the boot looked pretty good. It was time to go out and ski. But ever the Boy Scout, I brought a bunch of large rubber bands, and some plastic newspaper bags with me. If anything was going to go wrong, I figured it would be deep in the woods. The bags would protect my foot if I had to take off the boot, and the elastics would hopefully hold it together while I limped back home again. I did pass on the idea of trying to reglue the boot while out in the snow, however.

Going off into the Conservation Land around Horn Pond, I followed someone's snowshoe tracks along the outer trail between Fowle Brook and a large, unnamed pond. In places, the tracks disappeared under 3-foot drifts, and I had to make my own trail. All this time I was keeping an eye on the right boot, the one that  had just been repaired. Eventually the snowshoe trail turned-off, away from the way I wanted to go, and I was breaking a new trail through two feet of powder. It was then that I noticed that the other ski wasn't behaving  well. I looked down to see that the left boot was coming apart.

After getting the boot loose from the binding, and sliding my gloves down onto to the tops of  my carefully planted ski poles, I was able to get the rubber bands out of my pocket without dropping any of them onto the snow. Then, with some difficulty, I bent  down and slipped them, doubled-up for extra tightness,  around the toe of the boot. Reclaiming gloves and poles, I stepped into the binding, and set off again, still having to break a trail. The elastics were pretty tight around my foot, but they held the boot together the whole way back.

Sunday morning, after making sure that the left boot was fully dry, I got out the super glue and clamps, and repeated the process. In the afternoon, I unclamped it, and ran glue along the top edge of the sole, etc. An hour or so later, I was back at Horn Pond for a ski. 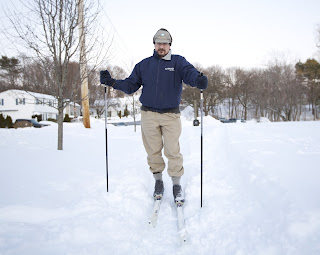 This time the trails were better, and I was able do do more skiing, and less trudging. After retracing my route from Saturday, I went on all the way around Horn Pond. The only tricky part was at the other end of the pond, by the Dam. I had to take off the skis to get across the parking lot, and was walking by the fence around the Dam when I got stuck in a big drift of what felt like "quicksnow". The snow was soft enough for my legs to sink into, thigh-deep, but it was then compacted enough to not want to let go of them.

Once past the dam, I was able to ski back along Arlington Street on top of the four-foot high snowbank left by the plowing. Just like the day before, it was dark when I got home, and I was soaked. But the boots had held together. (Just to be safe, I had brought the rubber bands and plastic bags with me.)

Conclusion: I can probably get in one or two more of these local ski jaunts, before the boots let go. Trying a longer and further-away tour is just tempting fate. And "forgetting" to buy new boots for next year will be just plain asking for it. But, I do know that, if I buy new boots and carry them with me, the ones I repaired will last indefinitely. This is due to a yet unnamed, but powerful phenomenon.

Just having a spare with you has a measureable effect on certain things--it puts them on notice that they can be replaced. If you bike without a patch kit, you are asking for flats. Ride with a patch kit, and it'll be a lot longer before you get a flat. But ride with an extra tire folded-up into a figure-eight and bungee-corded to your rack, and your bike tires will be on their best behavior for hundreds of extra miles. I know I'll look silly carrying a second pair of ski boots with me, as I ski and ski in my super glued boots next winter; but I am a New Englander, and I like to make things last.