Anne Crockett Home from storytelling where Mike did a great feature that included stories of a flood, and a tv-less childhood. Some good laughs and poignant too. He finished with an unusual scary story that I thought was his invention but apparently was not. Hmm. Other people think like that too? Weird. It was a nice night in any event.] 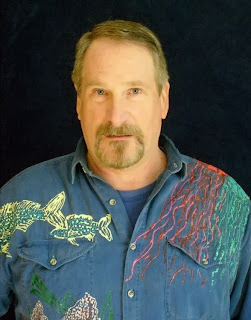 (Me in my Storytelling Shirt, which was
hand-painted by Annie Crockett using acrylic paints.)


The scary story in question was The Hobyahs, which goes back a long ways, and has many, many versions. In a lot of them the dog, Turpey, is subjected to unspeakable abuse. In mine (and I don't know why, it's not like I'm a dog person), he gets to experience far more character development than anyone else in the story. This tale is like a verbal Rorschach test--it is composed of a bunch of simple, but very unsettling elements, and everyone who tells it is clearly compelled to arrange them in a different way that reflects how they feel. You can listen to my version of this Story here: MDC Live Stories.
Posted by Mike Cohen at 8:17 AM